Today your Captain has been aproved for enrolling for a TWIC card! 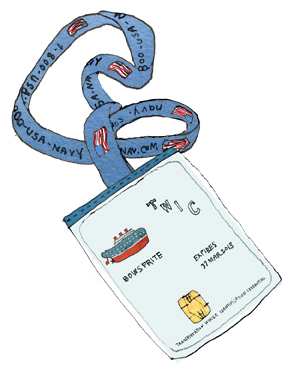 Hurray!
Once the card is recieved I can move around in any American port without a baby-sitter.

I can assure you that I am an innocent person who never has done anything wrong.
See my answers to the american authorities regarding my criminal record:

At any time in my life (excluding juvenile cases unless convicted as an adult), I was convicted, pled guilty(including “no contest”), or found not guilty by reason of insanity in a civilian or military court of one or more of following reasons:
1. Espionage or conspiracy to commit espionage? NO!
2. Sedition or conspiracy to commit sedition? NO!
3. Treason or conspiracy to commit treason? NO!
4. A federal crime of terrorism as defined in 18 U.S.C. 2332(g) or a comparable state law? (anybody    know this law? I don’t) I guess NO!
5. A crime involving a transportation security incident? NO!
6. Improper transportation of hazardous material? NO!
7. Unlawful possession, use, sale, distribution, manufacture, purchase…or dealing in an explosive or explosivs device? NO!
8. Murder? NO!!!
9. Making a threat or maliciously conveying false information known to be false, concerning delivery, placement, or detonation of an explosive or other lethal device in a public, goverment, public transportation, or infrastructure facility? NO!
10. RICO Act violations where a predictate act is a crime listed in above? I guess NO!
11. Attempt to commit a crime listed in above? NO!
12. Conspiracy or attempt to commit a crime listed in Q5 to Q12? NO!

Within the last 7 years, I was convicted, plead guilty (including “no contest”), or found not guilty by reason of insanity in a civilian or military court of any of the follwing fellonies:

13. Unlawful possession, use, sale, manufacture, purchase, distribution…or dealing in a firearm or other weapon? NO!
14. Extortion? NO!
15. Dishonesty, fraud, or misrepresentation, including identity fraud and money laundering(except welfare fraud and passing bad checks)? NO!
16. Bribery? NO!
17. Smuggling? NO!
18. Immigration violations? NO!
19. Distribution of, possession w/intent to distribute, or importation of controlled substance? NO!
20. Arson? NO! (don’t know what it means but I guess not…)
21. Kidnapping or hostage taking? NO!
22. Rape or aggravated sexual abuse? NO!
23. Assault with intent to kill? NO!
24. Robbery? NO!
25. Fraudulent entry into a seaport? NO!
26. RICO? (NO?)
27. Conspiracy or attempt to commit the crimes listed in Q13 – Q27? NO!
28. Within the last 5 years, I was released from prison following convition listed in Q1- Q27
29. A civilian or military court has found me to lack mental capacity oor I have been involuntarily committed to a mental health facility? NO!

30. NOTE: If yu answered “YES” to any of the crimes/felonies listed in the part Q5 – Q29, you are eligible for a wavier and may still be issued a TWIC. If initially denied for a TWIC, do you plan for apply for a wavier. (After consulting th lady behind the desk I left this one blank…)

I understand that I must return my TWIC to the address provided on the credential if I:
31. Am wanted, under indictment for, convicted, or found not guilty by reason of insanity, or of a felony listed in part Q1 – Q27? N… I mean YES!
(almost tricked me there….)
32. Am found to be lacking mental capacity or involuntarily committed to a mental health facility? YES!
33. No longer meet the immigration standards indicated by a “YES” in part A5? YES! (I spare you that part…)

This was only the part of my criminal record. I spare you the rest…

We are very lucky in this country that we have all these questions that SECURE that no crazy, violent criminals are walking around in port areas…
If anybody ever have answered YES to any of these questions he/she must be as crazy as ….

This is one of the easier enrolling procedures one meet on this side of the Atlantic! 🙂